The more damage you do to the Draconians, the more points you'll earn towards your Forsaken Mission quota. When you hit a specified quota target, you'll be automatically awarded with a randomly chosen blueprint and a bounty of Uranium from that Tier (there are four tiers, with T3 and T4 offering the best prizes at 4.5M and 50M points respectively). You may view all blueprints available by clicking 'Blueprints' on the Forsaken Mission page.  It is fun. Missions are ESSENTIAL to having a good game.

Each week, players will be given the chance to opt-in and participate in these missions to earn Quota Points, granting them access to Uranium and Blueprints, some of which can only be unlocked through Forsaken Missions.
Here’s everything you need to know:

As of Summer 2014, a level 40 Military Stronghold (easy BCs inside) gives you 128K points when destroyed. A MS-34 gives you 35K points. MS-47 (full of tough DX defenders) is approx. 202K points.  A list of points and resources for each base level is provided at the page Military Strongholds.

Fact Starting Below - Ignore Above

Hi folks, Kixeye just wanted to get some clarification on Forsaken Missions since there seems to be a bit of confusion around this new ongoing feature.

Missions will not run simultaneously with monthly events to provide clarity around appropriate targets. Forsaken Missions will recur each week; think of them as a normalized game mechanic that they can choose to participate in.

In-game FM menu
Add a photo to this gallery 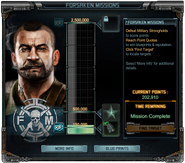 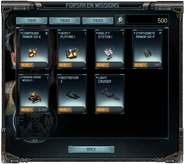 FM Reset Button ad
Add a photo to this gallery

Retrieved from "https://battlepirates.fandom.com/wiki/Forsaken_Missions?oldid=33745"
Community content is available under CC-BY-SA unless otherwise noted.