The L12 Dock is a new feature introduced 9/16/2015. Much heavier fleets are allowed with this dock upgrade. You first must have your Outpost upgraded to OP7 before you start your dock up to L12. The Dock to L12 takes a little over 4.5 days and almost 25K? Uranium.  The new max fleet weight is 38,107!  Its repair time is 3 hrs. if your foe destroys it. Every pirate's base, by the time you reach level 68 or so *MUST* have a dock 12.

In-game fleet menu
Add a photo to this gallery 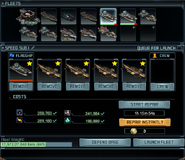 UI Improvements - The Dock
Add a photo to this gallery

Retrieved from "https://battlepirates.fandom.com/wiki/Dock?oldid=33922"
Community content is available under CC-BY-SA unless otherwise noted.