See how they work particularly if the dracs defeat you and some strategy ideas.  Scroll down to the longest comment on page 1 by 'nickalh'

Thanks overall to Kixeye, so far the campaigns look pretty great.  It is wonderful to get some tech [we've] been wanting all year especially another opportunity for certain hulls.

Some clarifications and answers- this is my understanding of failing during campaigns, an official confirmation would be appreciated.


Each campaign has three different prize packs.  Each prize pack has multiple, 5?, targets which players must defeat in order to earn the prize.  Each campaign has a theme such as learning to rushing bases with ballistics, long range bombing on bases, ballistic rushing fleets,

If you fail a particular target, either by timing out (10 minutes for at least some of the targets) or your fleet gets completely destroyed, you may attack that target again with the only penalty being repair time to your fleets.  The damage to the target stays if you exit & then reenter the same target.

Failing on a Prize Pack

I think the only way to fail on an prize pack is if it times out.  Each prize pack has a maximum timer of 36?,  12 hours, 6 hours or 1 hour.  Of course repair time will affect your ability to complete it in time.  Simply repair everything (or try zombie tactics) and restart the prize pack at your convenience.  When ready restart the 6 or so targets for that prize pack from the beginning.  You get to keep the previous prize packs you've completed.  This includes prize packs successfully completed for that campaign.

When completing a prize pack level, you receive all the prizes in that prize pack.  If anyone has photo evidence of before and after with multiple prizes, then please post in a comment

The mastery prizes may be repeated up to 5 times.  Unlike most hulls players may only build a single ship for each mastery prize.

Captains may view other players battles by clicking on the red ship in the battle.  This can be helpful to figure out effective strategies, etc.

One great strategy- zombie torrents, chainguns or possibly subs.  Torrent and chaingun give burst damage.  They only need to survive long enough to get into range and launch a full salvo.  This  can do significant damage compared to the repair time.

A friend used zombie torrents earn the mercury in 2 hours, which was better than the prize he spent many hours earning during the raid.

If anyone knows the link to the excellent, full page explanation of zombie tactics please message it to me.  Click on my name above or my picture.

Robot has said that captains may start a campaign anytime at all. 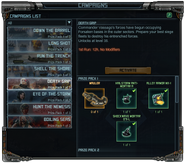 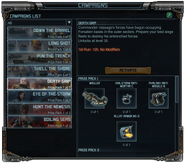 Eye of the Storm L1

Eye of the Storm L2

Eye of the Storm L3

Eye of the Storm L4

Eye of the Storm L5

Eye of the Storm L6

Eye of the Storm L7 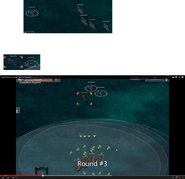 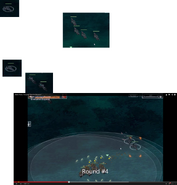 Level 40 - Boiling Seas Campaign
Add a photo to this gallery

Retrieved from "https://battlepirates.fandom.com/wiki/Campaigns?oldid=33305"
Community content is available under CC-BY-SA unless otherwise noted.